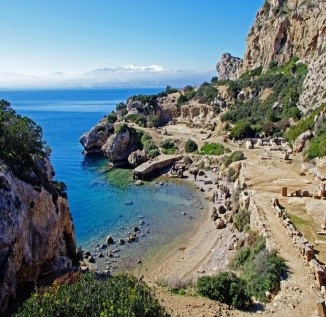 The sanctuary of Heraion, with two temples of goddess Hera, is significant for the study of the origins of Greek temple architecture and rural cults. It was in use from the 8th century BC and it became an important sanctuary in ancient Greece, until the late 2rd century AD when it fell into disuse. Its location in a small cove makes the sanctuary complex a wonderful place combining natural beauty and ancient history. Overlooking the sanctuary is the Malagavi Lighthouse one of the oldest stone lighthouses in Greece, built in the late 19th century, still in operation.

Admire the view from the lighthouse, walk through the relics of the archaeological site and have a refreshing swim in the sanctuary beach, in a sea of crystal clear waters.