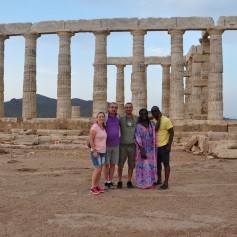 Cape Sounio is the spot where, according to the legend, Aegeus king of Athens leapt to his death off the cliff (thus giving his name to the Aegean Sea), believing that his son Theseus was killed during an expedition to Crete.

On this site the ancient Greeks built in the 5th century B.C., the temple of Poseidon, God of the sea. It is one of the major monuments of the Golden Age of Athens, made of white marble and hovering almost 60 metres above the sea, with a colonnade of 38 Doric columns on all four sides, of which 16 are still standing today.

Admire the beauty of the surviving relics of the temple and enjoy the superb view and the majestic sunset over the Aegean Sea!.