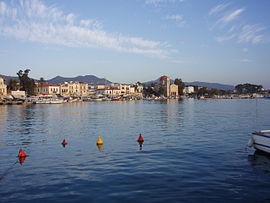 Aegina, with a rich history since the antiquity is nowadays a tourist attraction and a popular weekend destination for the Athenians. In the antiquity the island was a naval power rivalling Athens for some time, and it is reputed that it was the first city-state to issue coins in Europe. The island has a great number of interesting sights among which is the famous Aphea Temple. It is said that the temple is one of vertices of an equilateral triangle with the Parthenon and the Temple of Poseidon at cape Sounion.

Aegina town, the capital of the island, was the temporary capital of the newly founded Greek state (1827-1829), and it is known for its well-preserved neoclassical mansions built to host the first government headquarters.

Last but not least Aegina is famous for its pistachio nuts, considered to be among the best in the world!