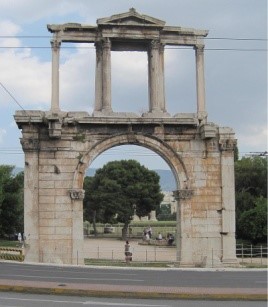 Hadrian's Arch,   most commonly known in Greek as Hadrian's Gate is a monumental gateway, made of marble and resembling a lot to similar triumphal arches of Roman style. The arch was erected in 131-132 AD by the Athenians as a tribute to the Roman emperor Hadrian and marked a division between the old city and the new regions in Roman Athens.